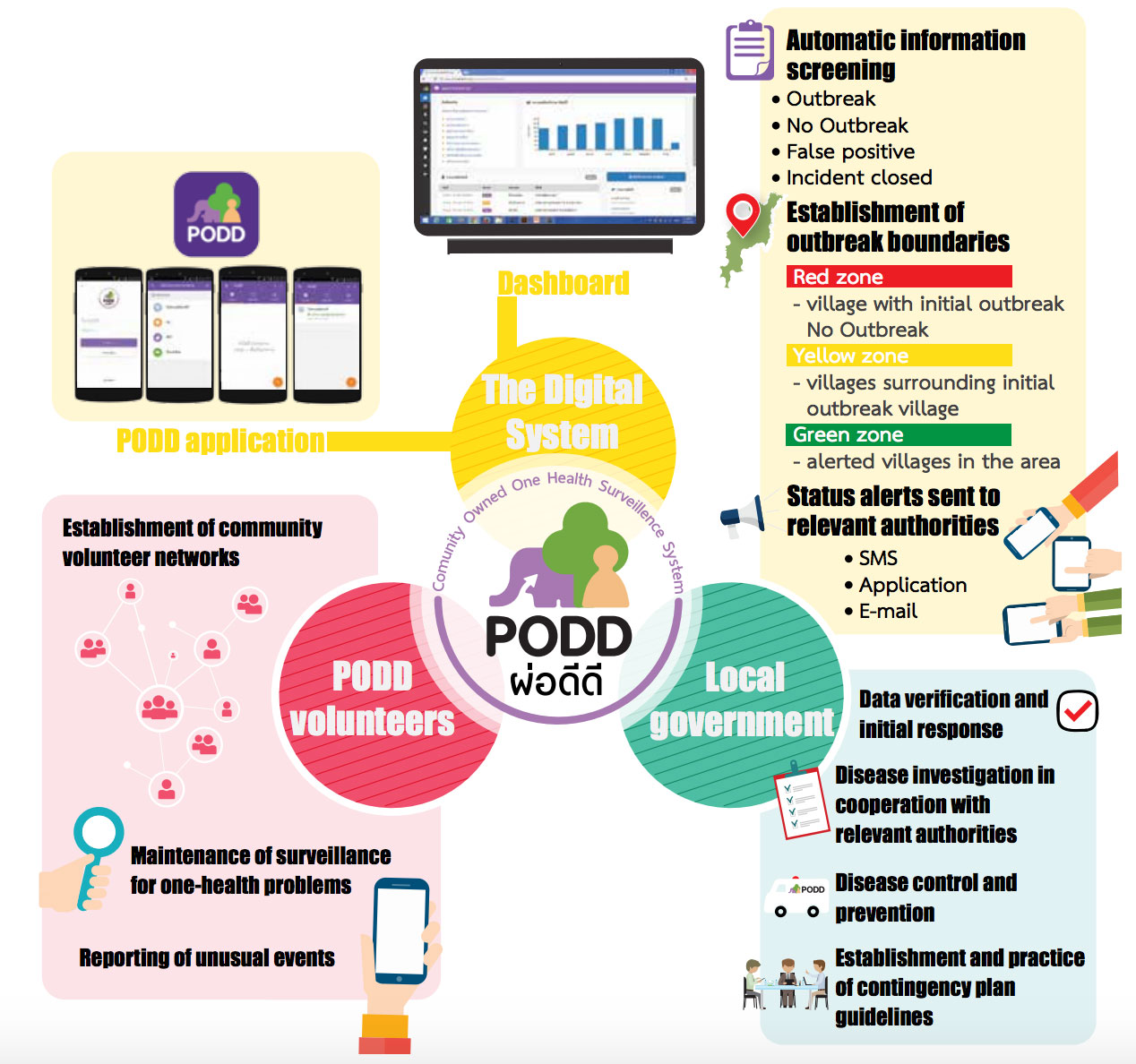 Because 70% of infectious, emerging and zoonotic diseases in human are spread from animals, disease surveillance and rapidly outbreak control in both of human and animals, therefore, are necessary methods to prevent health condition and diseases including reduce people’s expenses on their healthcare. Digital technology is also another way which is effective and capable to surveil promptly.

Skoll Global Threats Fund is aware of the danger of the diseases. Since the successful of avian influenza solution that got involved from strong communities, cultures and OneHealth network of Chiang Mai University and Chiang Mai province, it was eventually used as a model which was praised by international level. This operation increases confidence of public health system and animal health system performance in Thailand. By this reason, the Skoll Global Threats Fund makes supporting to the research as well as develops system of surveillance and rapid respond to the zoonotic diseases and animal epidemic diseases as a pilot project in Local Governments model which are formed by local collaborations and set a local benefit as a goal. It is expected that this model will be used to prevent the spreading of zoonotic diseases which becomes emerging diseases that kill many human being in the world.

Objective
To create one-heath based surveillance system for animal infectious disease that can be carried to humans or affect income of villagers, to promote assigned volunteers in reporting incidents such as possible factors of disease outbreak in the community and to develop communication system and digital devices to be installed for surveillance of abnormalities in the community in Chiang Mai.

Expected Benefit
The community will have one-health surveillance system with collaboration and support from central and regional government instrumentalities. Furthermore, it can be applied in regional, national and international level with sustainability and a model of surveillance for animal diseases to be carried to humans with collaboration of people in the community. In addition, it is to promote good image of Chiang Mai City to be tourist attractions free from animal contagious diseases with food safety and environmental security.

Components of one-health surveillance system (PODD)
1. Digital system is developed in 2 formats including
- Downloadable application available on smartphone to report abnormalities in areas
- PODD surveillance system panel which is usable on computer to do surveillance, monitor report result from mobile phones and to determine scope of outbreak and announce emergency response plan.
2. PODD volunteers are villagers in the community who are trained about installation and use of application. Their duties are to monitor incident and report the result via application as well as to basically respond abnormal events.
3. Local administrative organization sets up one-health operation center at sub-district level, manages surveillance works and solves problems of humans, animals and environment in the community. It also supervises PODD volunteers in the community, develop an emergency response plan and control PODD surveillance panel for sustainable benefit.